Over the Moon - Storyboards Part 1 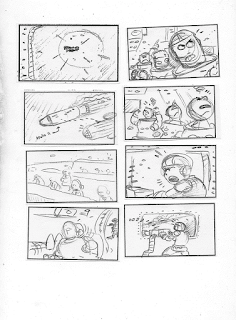 NOTES Page 1 Panels 6,7 and 8 were from an unfinished Connie Radar comic. The films story came about by asking what was Connie Shooting at? Tim Kidd, who shares the writing credit, suggested the space shuttle which lead to 'how about the original moon landing?'

Page 2 Panel 2 As in the real moon landing and for the sake of authenticity there were originally to 3 astronauts.

Page 2 Panel 5 Not included in the final edit were stock footage shots of ground control.

Come back for Part 2 tomorrow...

Posted by The ComicBook Factory at Friday, August 07, 2015