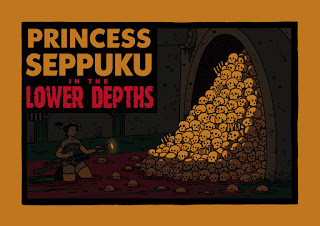 This was the first version of the cover for Princess Seppuku in the Lower Depths, the second Princess Seppuku comic that's due in a few weeks. What's wrong with it? I didn't like repeating the layout from Hunt for Robot-X with the black box in the corner and those skulls are all too uniform, sitting upright and tidy so the entire cover has been redrawn with something else. Thus delaying it but ultimately making it better I would hope. I'll no doubt recycle this art into something else, maybe Slayer would like if for their next album cover?
Original artwork for this as well as book one will also be available soon too. Come back around December 1st...

Posted by The ComicBook Factory at Tuesday, November 06, 2012