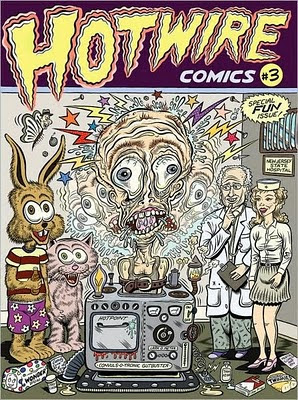 From the Press Release:

BROOKLYN, February 12, 2010- HOTWIRE #3 features a dynamic selection of artwork from the upcoming all-new third volume of Hotwire Comics! Following the success of last year's Hotwire #2 show, this seminal show features paintings, works on paper in all media from some of the heaviest hitters in the alternative comix scene, including Tim Lane, David Sandlin, Glenn Head, Mark Dean Veca, Danny Hellman, Jayr Pulga, Mary Fleener, Karl Wills, R. Sikoryak, Sam Henderson, Mats?!, Rick Altergott, Chadwick Whitehead. The opening of the show is timed to coincide with the release of the brand-new volume of Hotwire Comics. Hotwire #3 is currently on view at 18 Bridge St., DUMBO, Brooklyn until March 31, 2010.

The Harvey- and Eisner-nominated anthology of action, thrills, chills and transgression is back with a third volume! Anything goes in Hotwire, eschewing literary high-mindedness for a pure, gut-wrenching viscerality that you can tune in and rest your brain on after a long day.

Join us to celebrate the Hotwire #3 group show featuring the great selection of paintings, ink drawings and works in graphite.

About Scott Eder Gallery
Established in August, 2007 as a venue for bringing comic book art creators into a fine art context and gallery setting, Scott Eder has been dealing and exhibiting original comic book art at festivals and museums in the U.S. and throughout Europe (France, England, Italy, Germany, Spain, and the Netherlands) for over 15 years. All show info at www.scottedergallery.com
Posted by The ComicBook Factory at Friday, February 12, 2010