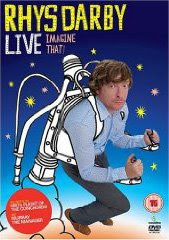 "Rhys Darby Live stand up show from the El Rey theatre Los Angeles - filmed in 2008. Packed with hilarious extras including an interview with Rhys, outtakes and bonus sketches and more. Rhys Darby is one third of the award winning HBO series Flight of the Conchords. His character, Murray the Manager, is considered by many to be the real star of the show, and with 100,000 Conchord's DVD's now shipped of a show only seen on BBC4 it is fair to say that the fans are a very dedicated bunch. In fact, with average viewing figures of 160,000 people, the conversion to purchase is unprecedented. Rhys' UK profile is set to soar with high profile movie roles alongside Jim Carrey in Yes Man, and the new Richard Curtis film The Boat that Rocked, while his starring role in the new Nike tennis ad with Roger Federer has further broadened his credentials as a comic actor. Rhys' first love is stand-up comedy and in Rhys Darby Live - Imagine That! We see Rhys on stage in Los Angeles performing his highly original, hilarious physical comedy routines that will not only appeal to existing fans but also to those who appreciate the visual comedy styles of the likes of Lee Evans."
- Amazon.com

The extras on this DVD include a preview of Alex Dron's very funny animated short "FOT". Voiced by the talented Mr Darby. You should buy this, it's available pretty much everywhere... more FOT news HERE
Posted by The ComicBook Factory at Sunday, October 26, 2008

choice! another item on my wish list for christmas! :)