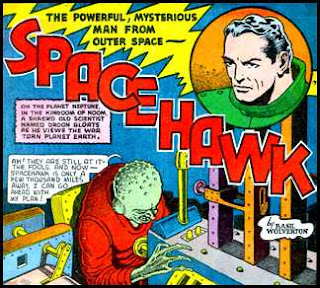 Yesterday I was on a panel to judge and critique pitches for 3rd Year animation students from Freelance Animation School. We assesed group projects and gave feedback on areas that could be improved. My biggest surprise was the amount of retro-science fiction themes! Does this mean we're also going to see a rash of feature films like this over the next few year? I knew of John Carter of Mars under development by Pixar due in 2012 but according to Variety there's now a Buck Rogers film due in 2011. It's a very difficult genre to get 'right' and can only think of about half a dozen examples that didn't just mimic, parody or piss on the form (unintentionally or not). Sky Captain and the World of Tomorrow was just awful...
Posted by The ComicBook Factory at Tuesday, May 20, 2008