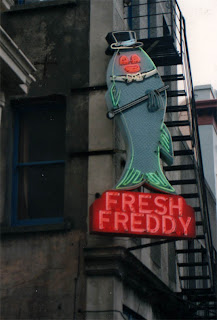 I took this photo about 10 years ago while living in Dunedin and have treasured it ever since. Another fine example of the weird phenomenon known as "Suicide Food", for more examples there's an entire blog dedicated to it HERE.

I intended to write a comic strip based on Fresh Freddy but never got around to it but it goes something like this:

Fresh Freddy is at his doctors office, his doctor is suprised to see him looking so well, "What is this? Last time I saw you Freddy, you were looking terrible! I even gave you only a few weeks to live!". Freddy lights up a cigerette and says "Ha ha! I know, I was so distressed I started smoking, I smoked so much it's cured me!"
Posted by The ComicBook Factory at Wednesday, March 26, 2008