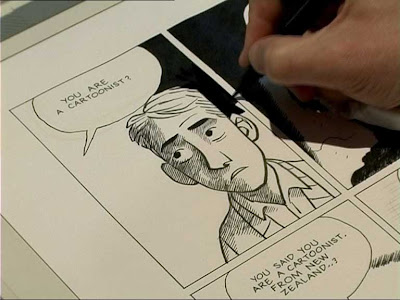 The writing and drawing of comic books in New Zealand is the subject of a documentary at this year’s Film Festival. The Comics Show will have two screenings at the Academy Cinema as part of the Auckland season – on Saturday 14 July at 1pm, and on Monday 16 July at 1pm. In the Wellington Festival, the film screens (by itself) on Wednesday 1st August at 12.15 and at 1.45 pm, in the NZ Film Archive theatre at 84 Taranaki St.

The Comics Show surveys the history of local comics (including Eric Resetar, the 1950s anti-comic panic, and the arrival of Strips) then focuses on a number of contemporary artists (including Barry Linton, Karl Wills, Chris Knox, Jared Lane, Robyn Kenealy, Coco and Pretika, Jason Brice, Tim Bollinger, Grace Campbell, and Cornelius Stone, among others). It visits comic shops (such as Cherry Bomb and Gotham), websites, events (such as Armageddon, Craftwork and the Eric Awards), and groups (such as Funtime in Christchurch). It looks at comics’ links with animation (such as Ant Sang and Bro’Town) and with music (from Flying Nun to hip hop). It also takes a trip with Dylan Horrocks to the comic shops of Paris, confirming that comics from New Zealand have a growing reputation in the land of la bande dessinée.
Posted by The ComicBook Factory at Tuesday, July 10, 2007